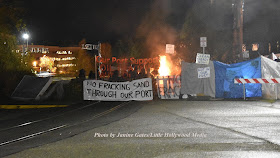 Above:  Activists blockaded the railroad tracks in downtown Olympia on Friday at Seventh and Jefferson Streets, preventing a possible shipment of ceramic proppants from leaving the Port of Olympia. The blockade continued Friday evening. The protest is similar to last November’s blockade, which was ended by law enforcement after seven days.

Activists blockaded the railroad tracks in downtown Olympia on Friday night at Seventh and Jefferson Streets, preventing a possible shipment of ceramic proppants from leaving the Port of Olympia. The blockade continues.

A small child, about two years of age, was seen by Little Hollywood within the encampment walking about or in the arms of a woman throughout the early evening.

Collectively known as Olympia Stand, the group is demanding that the Port of Olympia cease all fossil fuel and military infrastructure shipments. They also demand “horizontal and democratic control of the Port of Olympia, including participation from area indigenous tribes,” according to a press release.

“Olympia Stand and other participants believe climate change can be stopped by engaging in non-violent direct action and civil disobedience against fossil fuel infrastructure, from train blockades and Port shutdowns to occupations of pipeline construction sites. Policy-makers can continue to take no action on this issue, and doom future generations to an uninhabitable planet, or they can follow the lead of people around the world fighting for a Just Transition away from fossil fuels and extractive economies. Meanwhile, we will continue to fight, whether they like it or not,” says the release. 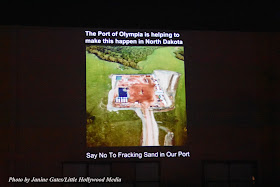 Above: A graphic projected onto the side of a building near the rail blockade illustrates that the Port of Olympia is assisting the fracking industry in North Dakota. “Say no to fracking sand in our port,” says the graphic.

A small group assembled Friday afternoon at State and Jefferson and stopped the train engine, which was pulling several cars. The train retreated into the port yard and disconnected itself from the cars. The engine did not leave the yard.

Several Olympia police officers arrived with pepper ball guns, but did not discharge them. The police left but continued to patrol the area in vehicles.

The group then moved to Seventh and Jefferson and by 4:30 p.m., had quickly blockaded the tracks with box spring mattresses, tents, couches, wood pallets, large pieces of plywood, file cabinets, and debris.

Activists created a bonfire in a barrel at about 6:00 p.m. to keep warm.

City of Olympia manager Steve Hall arrived at the blockade Friday evening at 7:00 p.m. saying he was unaware of what was going on, as he had been in a city General Government meeting. He had received a text during the meeting, but had not looked at his phone.

Olympia Stand members and other bystanders spoke with Hall about their demands and asked him to convey their concerns to the Port officials.

“Seems like a repeat, right?” Hall said, asking activists what the plan was for the night.

Hall said that actions against the blockade would up to the railroad police, explaining that Olympia would get involved, like last year, if requested through a mutual aid pact the city has with other law enforcement jurisdictions.

According to Hall, the Olympia police department responded last year only after called upon by the Washington State Patrol and Thurston County.

“I don't know what the railroad police will do,” Hall said, adding that such protests were unproductive and always end badly.

Hall's appearance sparked loud chants from the activists, driving him away from the blockade site.

Last November the same group successfully blockaded the tracks November 11 – 18, delaying a similar shipment for over a week. A multi-jurisdictional law enforcement action involving the railroad, Washington State Patrol, Thurston County Sheriff’s Department and Olympia Police Department ended the blockade in early morning hours with the use of pepper spray and rubber bullets, resulting in arrests and injuries.

In response, Olympia port executive director Ed Galligan addressed the council in December, and the meeting was disrupted by protesters.

In this year’s race for port commission, two out of three seats were at stake.

Incumbent Port Commissioner Bill McGregor has apparently retained his seat by a slim margin over challenger Bill Fishburn, who conceded the close race on Thursday. His win could have changed the direction of port policies.

In an April interview with Little Hollywood, Fishburn said, “Based on my research, it seems pretty obvious to me that the community is being ignored on specific cargos such as fracking proppants and military cargo. These seem to me to be cargo the community clearly does not want transported through their yards and neighborhoods but they are being ignored. I just have to ask myself, why is that?”

Little Hollywood has written extensively about Port of Olympia issues, including last year’s rail blockade and its contract with Rainbow Ceramics. For more information and photos, go to www.janineslittlehollywood.blogspot.com and type key words into the search engine. 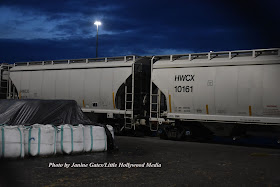