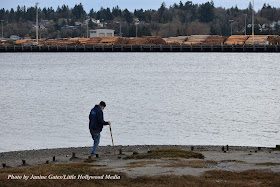 Above: Log exports are the primary line of business at the Port of Olympia marine terminal, as seen here from Rotary Park on Sunday afternoon. The Washington Public Ports Association says the log export boom was over as of 2014, with no future growth in sight. A 2018 Port budget proposal includes $3 million to purchase two new log loaders.

There is still no clear mandate for the Port of Olympia’s marine terminal operation located in downtown Olympia, just days after an election in which a progressive candidate for port commissioner apparently lost by a few hundred votes.

Despite significant public outcry, port commissioners and staff appear entrenched in business as usual, seeking out contracts that cater to the fossil fuel industry, and continuing the export of raw logs to Asia well into the foreseeable future.

By doing so, they ensure continued controversy, protests and lawsuits well into 2018. 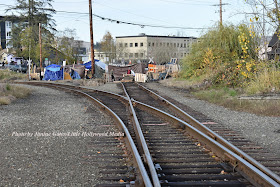 Above: Activists continued a railroad track blockade near Seventh and Jefferson Street in downtown Olympia this weekend. The blockade began on Friday.

It was a quiet weekend for activists who began a railroad track blockade on Friday near Seventh and Jefferson Street in downtown Olympia. The blockade continues.

Their goal is to prevent another possible trainload of ceramic proppants from leaving the Port of Olympia. The ceramic proppants are used in the process of hydraulic fracking for gas and oil extraction in North Dakota.

The process of hydraulic fracking is messy and degrades the environment, contaminates groundwater and causes earthquakes. Each time a well is fracked it uses two to eight million gallons of fresh water.

The activists, collectively known as Olympia Stand, have used their time without law enforcement intervention this weekend to fortify barriers on and around the tracks. 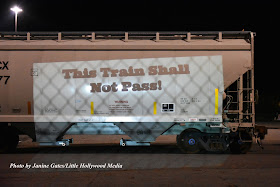 Above: Activists took the opportunity to project a message on a train car, “This Train Shall Not Pass!” for Port of Olympia officials on Saturday night. The train car is parked at the Port of Olympia and is one of several cars allegedly containing ceramic proppants.

Keen eyed port activists are also filing citizen complaints about other issues as well, such as the Port’s upcoming 2018 budget, a questionable expenditure for new log loaders and a failure to videotape public meetings.

The 2018 Port of Olympia budget proposal will be explained by port executive director Ed Galligan at a special commission work session on November 21, from 1:00 – 3:30 p.m. at port offices, 626 Columbia Street NW, Suite B in Olympia. He is scheduled to speak for two hours.

The budget includes the purchase of two new log loaders. The loaders cost $1.8 million if they are bought outright, but $3 million with financing over 20 years.

Of further concern to port watchers is that Galligan signed a legally binding lease agreement in June for the log loaders that cumulatively exceeds the amount he is authorized to sign for, $300,000, without a vote of the commissioners.

She thinks Weyerhaeuser should pay for the log loaders or, if that's not possible, the commissioners should delay their decision and continue to lease them instead of purchasing them. Since this is a “lease to buy” arrangement with delayed penalties, it would cost very little to postpone this purchase even for a year.

“A delay could be used to gather better information and financing options. The current plan of ten years of low payments and ten years of high payments contributes to the additional $1.2 million over the named price,” she said in recent public testimony in front of the commissioners.

The long-term viability of the log export market is also questionable. The Washington Public Port Association says that demand for log exports will remain flat or even possibly decline in the foreseeable future.

“In March, Weyerhaeuser said it is ready to bring its extensive Southeastern timber holdings into production. Meanwhile, Washington’s timber looks increasingly like toothpicks. Who do the commissioners expect to pay for this? The taxpayers. They claim that it will somehow lead to even more log exports, and that is good for us all, but Japan, for example, is growing its own trees now….

“Port commissioners never seem to think strategically about the future, or think about where our own trees are in these global cycles of timber extraction. They pretend that ‘if you build it, they will come,’ and instead of expecting the timber exporting business to pay for itself, they expect Thurston County taxpayers to pay for it with promises that miracles will happen,” says Wheatley.

Commissioner E.J. Zita is looking for alternatives to Galligan’s budget, as Galligan has not yet provided any other options.

The commissioners are set to vote on the final 2018 Port budget on November 27.

And if you wanted to binge watch Port of Olympia meetings and catch up on all the drama, there's a problem:

Since February 2016, the Port has recorded its own meetings, taking the contract away from the well-respected services of Thurston Community Media who contracts with the cities of Olympia, Lacey and Tumwater and Thurston County to cover official meetings. The results have been dismal.

For well over a month, port staff has only videotaped their meetings for a couple of hours. Some port meetings last over four hours. And, the port is also apparently editing its own meeting video through an outside vendor. From the beginning, audio quality is also a persistent problem.

Bev Bassett of Olympia, another avid port watcher and budget cruncher, recently wrote a formal complaint to the port about inadequate and unsatisfactory citizen access to meeting videos from the Port's website. She says only the most recent 40 videos can be accessed.

“The October 20, 2017 Budget Study Session video will not stream beyond two hours, 22 minutes. Additionally, the video for the marathon five and a half hour commission meeting on October 23, 2017 is completely unavailable on video - only audio is available,” she wrote to port staff.

About heavy video editing, Bassett says that the first part of a video from a meeting where the public content section included a skit parodying Galligan and Commissioners Bill McGregor and Joe Downing, plus a six minute presentation about Port involvement in climate change by Bassett and another port activist remains unavailable.

“It seems an unlikely coincidence that the Port's video system usually malfunctions when there are contentious meetings about difficult and controversial subjects.  These are only a few examples of these recurring problems with video access to records of public Port Commission meetings,” says Bassett.

Port staff responded to Bassett’s complaint on November 16 saying they regretted the “glitch,” saying the meeting minutes serve as the official public record for Commission meetings.

“Audio recordings are not required, but rather a value-added service we provide in order to facilitate public access to Port discussions and decisions.  In other words, we regret the glitch and will work to resolve it promptly, but can assure you a formal record is being taken,” said port communications manager Jennie Foglia-Jones.

At the same time the port took over its own video recording, Commissioner McGregor initiated and successfully changed the format of meeting minutes so that a brief synopsis of an individual's public comment was eliminated from the minutes.

His stated reasoning, at the time, was that the public could go to the videos to hear what was said. 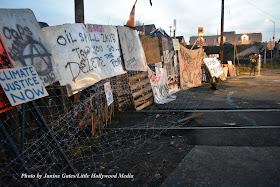 Above: The rail blockade in downtown Olympia continued on Saturday and Sunday with little to no obvious law enforcement presence. Activists used their time to fortify their blockade.

Editor's Note, November 21, 2017: Previous versions of this article said that the 2018 Port of Olympia budget meeting was set to be voted upon on November 28. The date is actually Monday, November 27. Also, port executive director Ed Galligan signed the lease agreement for the log loaders in June, not July. Little Hollywood regrets the errors.